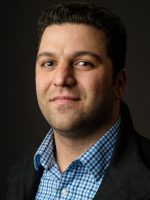 Dr Saman Gorji is an electrical engineer, with a wide range of experience in both academia and industry contributing to research and development in renewable energy systems and efficient power conversion strategies towards a carbon-neutral environment.

Saman’s current research interests include efficient power conversion systems, green hydrogen microgrids and renewable electrical energy systems. His experience along with his interests equip Saman to contribute effectively to deliver key Commonwealth milestones for the CRC within the Hydrogen Export and Value Chains theme as well as a source of electrical engineering expertise for projects within other CRC themes.

Saman received his BSc. and MSc. degrees from the University of Guilan in 2011 and 2013, respectively, and a PhD degree from the Swinburne University of Technology, in 2018, all in electrical engineering. During his PhD studies, he received several prestigious awards including Best Student Paper Awards from IEEE Victorian Section (2016), IEEE Australia Council (2017) and IEEE Asia Pacific (2017). He is also a recipient of a Swinburne Seed grant in 2017 and a QUT Catapult grant to establish a digital mirror for the H2Xport project in 2020.