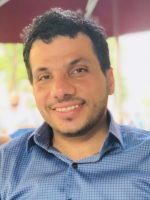 While employed at UWA, he has maintained on-going collaborations with other top fluid science groups in the world including Imperial College London, NASA, Ruhr-University Bochum and the National Institute of Standards and Technology (NIST, USA). He is an Honorary Research Fellow at Imperial College London and he has worked as a Process Engineer in Petroleum Development Oman and as a Research Associate at Imperial College London. He also leads a research group focused on “Propellant and Cryogenic Fluids” in the recently established UWA International Space Centre.

He has been awarded a few prestigious awards including The Abu Dhabi International Petroleum Exhibition & Conference (ADIPEC) Award for the best PhD dissertation of the year, Dudley Newitt Prize for Experimental Excellence due to exceptional merit demonstrated by experimental excellence, and Qatar Petroleum Medal for Research Excellence in Clean Fossil Fuels due to outstanding achievements in CFF research. Saif has a PhD and MSC from Imperial College London, and BEng (Hons) from Nottingham University.