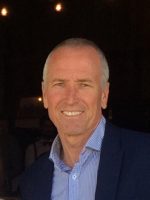 Chris Clark has over 30 years’ experience working in the public sector across a range of different service areas.

Chris was appointed as the Deputy Director General, Infrastructure, Economy and the Environment at the Department of the Premier and Cabinet in April 2022. In this role, Chris is responsible for providing strategic policy advice to Government on a number of key government priorities, as well as working with government and industry to overseeing the development and delivery of infrastructure projects and providing operational, management and administrational support to the Premier, Ministers, Parliament and the Department.

Prior to this, Chris was the Deputy Director General, Resources and Project Facilitation at the Department of Jobs, Tourism, Science, and Innovation. Chris’ role entailed facilitating and assisting the development of State significant projects in areas ranging from the resources and oil and gas sector, through to agriculture and tourism. This included leading the implementation of economic development initiatives on behalf of the WA Government including the Future Battery and Critical Minerals Industries Strategy and the Renewable Hydrogen Strategy, as well as planning and managing the State’s Strategic Industrial Areas.