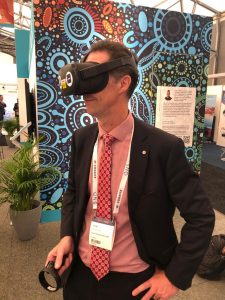 An emerging and globally significant research facility that will accelerate decarbonisation of LNG and the commercial-scale development of hydrogen is being brought to virtual reality life at one of the world’s premier oil and gas conferences – ONS in Stavanger Norway.

The Kwinana Energy Transformation Hub (KETH) is the flagship project of the Future Energy Exports Cooperative Research Centre (FEnEx CRC) and will be an industrial-scale facility to research, test and demonstrate decarbonisation technology solutions for the energy industry.

To help promote increased international participation in the KETH as well as the world-leading research and development that is being conducted by his organisation in Western Australia, FEnEx CEO Eric May is participating in a “Team WA” delegation that has been organised by the WA Department of Jobs, Tourism, Science and Innovation.

At the conference the KETH is being showcased on a set of virtual reality headsets that have kindly been provided by INPEX Australia.

Recently the KETH was in the news after moving into Front End Engineering Design (FEED) and the facility will be operational by the end of 2024 or early 2025, subject to a successful capital raising by the end of this year.

If you are in Stavanger for this globally significant conference, visit the WA Stand No. 4700, Hall 4 and take an opportunity to tour the KETH on the VR headsets!

The KETH comprises of an 800 kg/day green hydrogen electrolyser and a 10 tonnes/day LNG facility. It will be a first-of-a-kind facility providing an open-access, multi-user environment for demonstrating and testing energy transition technologies at industrially relevant scale, as well as certification of equipment and training for hydrogen and LNG facility operators.